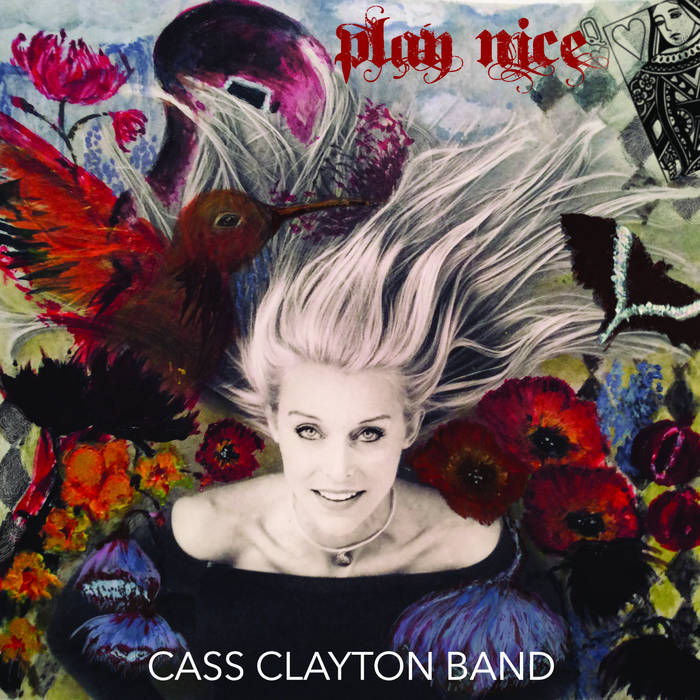 Cass Clayton Band has become known for its tight chemistry and high-energy stage presence, which has landed them on some of the best stages and radio shows in the country. Their blend of rock, R&B, funk, blues and soul has a contemporary feel. CCB won Album of the Year 2018, in the Colorado Blues Society Members’ Choice Awards. Cass's new album, PLAY NICE, was released in July, 2019. ... more

Used to be a pretty drive through town
Now the streets are empty, and the stores shut down
Fifteen churches, but you can’t buy a drink
Hell of a missing link

I packed my bags, I turned the page
From a tired main street and minimum wage
To a brand new chapter in a brand new town
And a new life I’ve found

There’s a universe, where we can meet, smaller than the eye can see
But there’s no evidence, no clear sign, so everyone just passed it by
Can’t take a picture, to validate, something that was never made
But in the silence, you may know, where your soul wants to go

You can’t divvy up, infinity, the whole is in the part you see
And I can’t give you, just a little love, it’s mixed with everything above
That universe, inside your eyes, they see it and they walk on by
Inside the inside, where nothing ends, that’s no place to make new friends

You may think, I have it all, but everything I want is small
A silent moment, not on the run, the feeling that we might be one
Been swimming in, the grandiose, but it can’t even get me close
To the truth, I used to know, before I hit the undertow

Can’t take a picture, to validate, something that was never made
But in the silence, you may know, where your soul wants to go

I see you walk in, get a gin, find your place at the bar
Pretty girl to the right, on the left that old guitar
I’ve seen you here before, bottom floor, on the main back stage
Guess it wasn’t time to know you, so we went on our way

When you lay it down, you know how, to move the atmosphere
And I’m leaning in, the whole crowd, just fades and disappears
Don’t really know you, but you cut through, to my softer side
And I almost didn’t notice, when they turned on the lights

Not here for romance, but by chance, you walk over my way
People all around, but your eyes, never wander away
Under the warm sky, you ask me why, should we have to wait
Could we spend some time together, never know it might be fate

This is the part, breaks my heart, but it’s nine a.m.
And we don’t know what this is, but it sure ain’t friends

See you later, sweet stranger
Track Name: B Side
B SIDE

If we’re gonna be together
No need to bite your tongue
Some songs aren’t for everyone
But that don’t mean that they should go unsung
I want the B side, yah I want the B side too

Playing the A side
Over and over and over again
What about the B side
Oh we got to jump in
Track Name: No Use In Crying
NO USE IN CRYING

Sometimes I sing, instead of talking
Cause baby that’s the way I feel
Like everything should rhyme, with the rhythm in time
Body swaying like a tree
Wish life was groovin’ like my favorite song
But sometimes it just drags along

If I should dance, instead of walking
You know the spirit, is moving me
And I don’t care, who’s a watching
Cause in the moment, I have the key
To moving right along with the flow
Digging all the highs and lows

They may not want you, to sing your song
But that’s just jealousy
Cause you move your feet, to your own beat
Don’t care if anyone can see
You may not always please the crowd
Love ‘em anyway and sing out loud

Listen to the rhythm that you have down deep inside
There’s a song that’s only yours, sing it ‘til the day you die

Now they may tell you, to think positively
But baby that’s just a line
Cause they don’t wanna know, when you’re in the throes
And life isn’t going fine
Allow yourself to go adrift
Then come on back and remember this
Track Name: Tattered and Torn
TATTERED AND TORN

You’ve got a book, to write…
Hiding down, deep inside
But it may never ever come out, to see the view
Your mind can see the limelight
Bow to the crowd, exit stage right
But in the world, your dreams are known to just a few

Don’t tell me the fairytale
You know I’m not so frail
I’ve had my own twists and turns along the road
Will you let someone share your tale
Look underneath the veil
We both know, that the cover is just for show

If I bow down in the morning, and send out a higher prayer
Get drunk in the evening, does that mean I’m unaware
Or do you think it means, I like to live in between
Look...with…in…and you’ll see

You may think I’m confused, but I know who I am inside
Check your boxes if you like, I remain unclassified
Don’t you ever wanna cross the line, that old world won’t let you shine
Look…with…in…and you’ll see

They like the cover but not the book, close your eyes take a better look
Look…with…in…and you’ll see

Is she an angel or a whore, is she just what you adore or hate Would you keep her in a box, so she never finds her fate
Or could you let it flow, see where she wants to go
Look…with…in…and you’ll see

I don’t stake any claim, my flag doesn’t have a stripe
Any color that you choose, is bound to start a fight
Or could it maybe be, that we’re meant to live in between
Look…with…in…and you’ll see

They like the cover but not the book, close your eyes take a better look
Look…with…in…and you’ll see

You may think she has fallen, when she really heard the calling within
If you listen you must follow, even if they call it a sin
Mold my world as I may, a potter with a little clay
Look…with…in…and you’ll see

The man with three legs goes town to town
With Siamese twins and wolf girl, renowned
For howling at the crowd, to fill the tip jar
She richer than them by far

The most beautiful girl in the world is disguised
In a body as large as the wide open sky
They don’t look very deep, they just gape and they stare
As if she’s not really there

All the freaks that we meet
The pointers and laughers, impaired by conceit
Grotesquely two-faced, we pray for their misshapen souls

All the freaks that we meet
God fearing witnesses, drunk with deceit
Keep your eyes open, the preacher will throw the first stone

The tallest man alive has brittle bones
And somber eyes from years alone
He doesn’t say much, but his words are true
Even though he’s pay per view

The tiniest couple, a woman and man
They had a child you could fit in one had
He didn’t live long, and the people they came
To see the world’s smallest grave

All the freaks that we meet
The pointers and laughers, impaired by conceit
Grotesquely two-faced, we pray for their misshapen souls

I was happy...to forget…waking up with regrets
I thought that stage…was over…but now I need a shoulder
To cry on…(cry, cry, cry on)
Singing this foolish song

Think through, plan head, I’m not easily misled
I don’t gamble, play around…I’ve always been too proud
So why….(hy hy) baby
Am I so preoccupied

Look up at the sky, throw my head back and wonder
What’s been going on back at home
One more night to go, don’t have a lot to give
But I’ll dig it up for the show

Words don’t mean nothing, my heart has been hard to find PRE-CHORUS
Some flowers just might change my mind

Got nothing to bring, don’t look me in the eye
Cause you surely won’t see a thing
Yah, I been drinking too much,
Been taking the place of my good man’s touch

Words don’t mean nothing, my heart has been hard to find
Some flowers just might change my mind

Words don’t mean nothing, my heart has been hard to find
Some flowers just might change my mind

Day’s gonna be…dark as the night
And things just won’t be…going just right
Dearest the one…king on your throne
Don’t ever leave…me…alone
For without…your touch…I….have no love…I have no love

That’s why I wanna say baby, baby, baby
Longing to hold…you near…but can’t you hear
That all…the sweet things, that I wanna whisper in your ear
Because, love is gone, and the only thing you got to do babe
Is just to come on back home baby yah
Where you belong, where you belong

Day’s gonna be…dark as the night
And things just won’t be…going just right
Dearest the one…king on your throne
Don’t ever leave…me…alone
For without…your touch…I….have no love…I have no love

Bandcamp Daily  your guide to the world of Bandcamp